THE RULES HAVE CHANGED...
In a decision that will fundamentally change the future landscape of tennis in the United States, the USTA has passed an amendment to mandate that all 10 and Under Tennis tournaments be played using the following:
• Smaller courts with lower nets
• Lighter and lower-bouncing balls
• Smaller and lighter racquets adjusted to a child's size

The change took effect on January 1, 2012, and applies to all USTA-sanctioned events for children 10 and under. This new, confidence-building play format designed for kids 10 and under makes it easier for kids to pick up a racquet and have fun right away - even if they've never played before. By using equipment sized right for them, kids learn quickly, develop better technique and love the game for life.

THE RULES HAVE CHANGED...
It's A Whole New Ball Game

QuickStart Tennis using the new 10 and Under Tennis play format is like Little League Baseball and other youth sports such as soccer and basketball. These youth sports employ smaller equipment and fields/courts so that kids can achieve success the first time out—and sustain that success every time they play.

Let's Move! with the First Lady: 10 and Under Tennis

Learn more about 10 + Under Tennis from the USTA

To register for SCJTL/USTA Workshops and tennis events CLICK HERE.

2006
The Suffolk County Junior Tennis  League  (SCJTL) was among 27 sites selected throughout the Unites States to test  the new 36/60 progressive tennis development concept. This concept is what is now know as the new QuickStar Tennis program.

To register for SCJTL/USTA Workshops and tennis events CLICK HERE.

QuickStart Tennis is a new format to help kids ten and under learn and play the game of tennis. To make it easier for them, we changed a few things. The court sizes. The racquet sizes. The balls. The scoring system. Even the net height.

Now any child between ages five and ten can start playing tennis almost immediately-even if he or she has never picked up a racquet before. And just like other popular youth sports, QuickStart stresses the importance of play and team competition. It's also now part of the USTA Jr. Team Tennis league and can be part of your existing programs as well. Which means that even more kids will have the opportunity to experience this new format, have fun playing with their friends and develop skills that will become the foundation of their game.

This new instructional approach, formerly called "36/60," has been designed by the USTA in partnership with the teaching associations (USPTA and PTR), and through research by the International Tennis Federation. 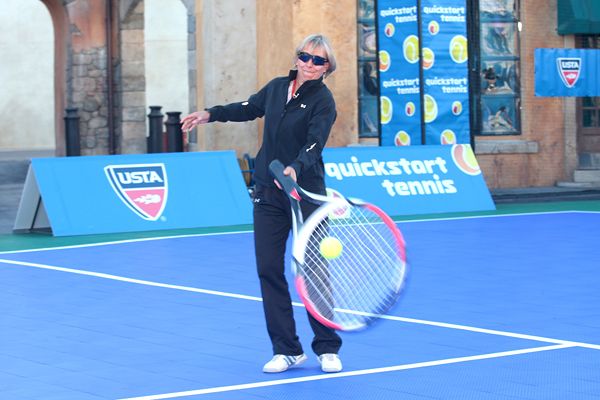 The same weekend that the QuickStart Tennis format was launched at ESPN The Weekend at Disney’s Hollywood Studios at Walt Disney World Resort in Orlando, Fl., more than 80 tennis coaches, pros and active volunteers joined together in Philadelphia to get an inside look at the new initiative.

USTA 10 and Under Tennis Pathway

Click for answers to commonly asked questions. If you do not see what you are looking for, send us a quick email: scjtl@ariastennis.com

Only the best in tennis!
Apply for a staff position.

SCJTL provides quality tennis programs that are accessible, affordable and fun for kids to learn and play tennis with friends and peers.